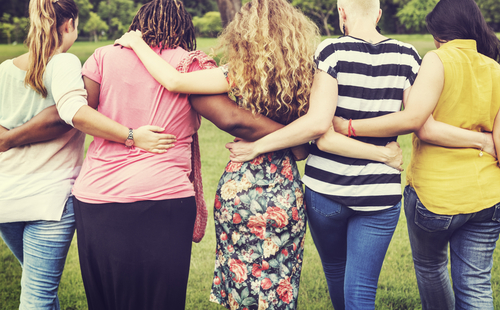 I am against all forms of inequality, including discrimination on grounds of gender. However, I am not a feminist. I see plenty of prejudice and systems in place to protect the privileged – most often white and male. But I am still not a feminist.

A feminist isn’t just a person who fights for women’s rights. The term describes a way of thinking as well. A feminist is someone who has observed women as victims so declares themselves on guard, in battle, making noise. A feminist needs the feminist fight because without it, women are victims.

There is no place for non-feminists in the paradigm. Feminists are working towards a world where everyone thinks like a feminist. As a non-feminist, the fact that I dislike inequality simply does not cut it. If I can’t see that women are being victimised and want to do something about it, then I am still missing the mark.

I could certainly have been a feminist if I’d lived in the 60s or 70s (for instance). I guess I just feel that it’s no longer so cut-and-dry. A small part of the prejudice I observe is related to gender. There is still progress to be made but not so much so that I will single out this battle. I’ll fight for fairer workplaces with competent managers who recruit on merit. I’ll fight for unsegregated education. I’ll fight against greed in business. But to fight for women, as a collective, in this wealthy western country, is not a strong enough drive for me.

Feminists might provide a long list of examples of sexism towards women (everyday sexism etc.) but some are open to interpretation.

Although cultural changes over time will help, as long as social deviance exists (i.e. for eternity), so will violence against women. This is down to biology and the workings of sexuality i.e. women are generally weaker and can be penetrated by a man for his sexual pleasure. Taking responsibility for our safety is not ‘giving in’.

Pay should be fairer for everyone. Ways of working should be made more flexible across the board. We should continue to make it easier for men to stay at home and look after children. But whoever it is that takes time away from work to have a family, man or woman, they cannot expect their career to continue as if nothing had ever happened. Women or men planning to take maternity leave in the near future should still have the same opportunities as those who are not but there’s no need to take the mick…

The interaction of class and gender means that working class women have drastically different expectations for themselves than women of ‘higher’ classes. They will have low-paid, ‘unskilled’ jobs and tend to be more reliant on men. This is complicated because it’s about identity as well as opportunity but it could be undone with careful attention, over time.

Now here’s a tricky one: it’s going to take both men and women to stop thinking of themselves as two different breeds, rather than just people, differently gendered. Lots of men are looking for a partner who can be the pretty object on their arm, who knows how to be a lady and always makes an effort with her appearance. Women reinforce this stereotype, especially when they expect to be treated like princesses with roses on Valentine’s Day and admiration in their wedding day white dress. Similarly, macho male behaviour can be encouraged by women because they say they want a ‘real man’ and a man who takes charge. There are of course plenty of women who expect men to make the first move and are on some level flattered if a stranger shows them attention.

There’s also the question of cultural bias. I can comment on my own culture and I can privately hold a view about the role of women in other cultures, but while I might provide support if approached, it is not my place to interfere. Many women across the world tell us that they are happy with the division of labour and feel valued in their role in the domestic sphere.

Feminism will always have this problem, distinguishing it from, say, the battle against racism. Because women are active players, embodying stereotypes; choosing who they love; raising boys to be men. Victims of racism are outcasts, abused, maligned, murdered. There is barely any comparison.

So let’s take this opportunity to get real, take responsibility, and put our energies into challenging all inequality, wherever we encounter it.