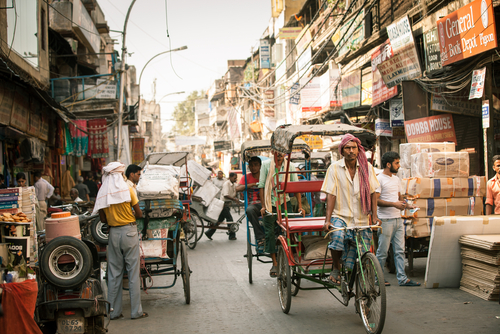 One is in India. After jaunting through a handful of cities in the North of the country (Amritsar, Agra, Jaipur, Varanasi) one is back in New Delhi.

It is hard to come to any particular conclusion about New Delhi, other than it is a place of contrasts and contridictions. It is wealthy, yet at the same time there are swathes of poverty. Part beautiful, part decrepit. Secular, yet spiritual and religious. Modern, and yet at the same time traditional.

Arguably, Delhi is prospering. Generally the infrastucture is good and one can see that a modern city is starting to take shape. One is no economist, but taking a cursory look at the visual evidence, one can see indicators of economic prosperity and investment – new metro system, flyovers in various states of completion, seemingly new office and residential blocks, high end boutiques, a proliferation of malls and shops offering the latest in consumer goods; not to mention the expected colonisation by the usual poster boys of globilisation. If one were that way inclined, one indeed could spend his time gallivanting on a shopping spree.

Whilst many are obviously rolling in cash, it does not disguise the fact that the wealth has not filtered down. One only has to wonder down a few back streets to visualise. Poverty and all its barometers are rife – slums, decaying and decrepit buildings, street kids and beggars. Regarding beggars, it is inevitable that they are drawn to an obvious foreigner. However, one can only refuse all requests. Not becuase one is a hard-hearted bastard, just a pragmatist. From observation, handing cash to one, invariably leads to others following. Alas.

As the number of people of my extractinon is virtually next to zilch, I am constantly stared at. One hastens to add, that this is more out of curiosity rather than any apparent hostility. The occasional ‘Bob Marley’ catcall (“Bob Marley taxi, I give you very good price”) has not gone unheard. I do not find these reactions paticularly unnerving or irritating as it is what I expected, and one can only pretend to be oblivious. It is particularly amusing those that stare with this noted deadpan, po-faced expression. Others stop and stare in wonderment, or proceed to question one as regards name (i.e What is your good name, Sir?), origins (i.e From which country are you, sir?) or authenticity of one’s hair (i.e This your hair, is it original?). Countless times, there have been requests for photos. Indeed, if one was to charge the equivalent of a tenner every time someone requested a photo with me, the cost of one’s plane ticket would have been more than covered.

Among the few ‘what the f***’ moments, was the experience being ferried from the airport to my residence by taxi. Frankly, the standards of driving on Delhi’s roads are crap, with drivers being chief heart-in-the-mouth merchants. There are lanes, but there is no discipline; traffic lights but the drivers are colour blind. Overtaking at breakneck speed with cars in the oncoming lane, and frequent cutting up are just a few of the ‘skills’ exhibited.  Throw in the penchant for pedestriains to make the road their own, along with the the omnipresent ‘sacred’ cow, then you have the chaos that are Delhi’s roads. Cue the soundtrack of incessant honking car horns, that to the unaccustomed is an assult on the aural senses.

The other cities one has visited share similar characteristics with Delhi, albeit with varying levels of development. Like Delhi, much in the way of the rich cultural and spiritual heritage has been preserved.  Many of the numerous Hindu and Sikh temples are works of art. One can vouch for the assertion that the Taj Mahal in the flesh is a beautiful thing, probably the most beautiful building in the world. Though it must be said, the city of Agra in which it dwells is a rather nondescript place. The Golden Temple in Amritsar is also easy on the eye. The Hindu holy city of Varanasi is full of temples, though the city as a whole has much in common with Delhi’s back streets. Much of it is dusty, crowded and chaotic but there is a lot of soul and character in the place.

At certain times during my jaunts, one has had no option but to dine on vegetarian cusine. One speculates that this is due to certain religious stipulations in certain areas, though one’s knowledge is lacking to confirm this. I have to concede that much of it was actually rather good. This is coming from someone who usually treats any vegetarian menu, with the contempt an alcoholic holds for Kaliber beer.

To date, the notorious ‘Delhi Belly’ I have been warned to expect has been avoided. Sod’s Law is that it will probably happen, now it has been mentioned. One can only carry on in the avoidance of non-bottled water and street food. Given some of the hygiene standards witnessed, probably a wise move.

It has again made one reflect on the facile nature of the ‘I am dressing for me, not attention’ argument purported by many women that like to ‘flaunt it’.

The average red-blooded, hetrosexual male from occidental shores probably notices, that during his time here, his focus as he roams though the streets is not averted by the female form as it normally is; despite many Indian women being naturally beautiful. This is because the average Indian woman is modestly dressed, and not displaying the acreages of flesh or bodyforms commonly on display in the West.  It has again made one reflect on the facile nature of the ‘I am dressing for me, not attention’ argument purported by many women that like to ‘flaunt it’.  However, it must be said that one’s observations of Indian women flies in the face of what one sees as one surfs through the numerous cable TV channels. Many, if not most Indian music videos are a virtual fleshfest compared to what is seen in society, with the women writhing and dancing around in relative nakedness.

One could go one about his observances and experiences, but my catharsis is over. I must say that so far I have enjoyed my time here. Even the various unpleasantries and various ‘what the f***’ moments have been beneficial, as one cannot live a life of sanitisation. It was no doubt implicit in the questions and statements put to me by some of you, that my sanity in visiting India was being questioned (India??! ‘Why you wanna go there for??? Rather me than you, mate!  And the ever so inane ‘Don’t eat the curry, it might be snake instead of chicken’). Indeed, some of you may still be questioning my sanity. That is one’s right. Though I suspect that much of these questions were based on unbalanced, media fuelled stereotypes. As much as I have seen the seeds for many of these stereotypes, much is based on myths or complete fallacies. As with everything ‘they’ tell you about outside the occidental world, “believe in none of what you hear and half of what you see.”